Orgonite is the secret ingredient that makes the orgone generator so powerful when it comes to generating life force. 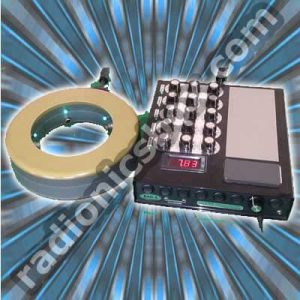 Each generator of the RAD 5 is switched on and off individually.  Moreover, the RAD 5 is an Aqua Optimizer, i.e., you can use the ATG 5 to make living water, which is charged with Chi energy.  Moreover, you can charge this water with any type of effect, which you desires, and which you can transfer radionically:  Set up the manifestation program, set the dials of the RAD 5 exactly the same way as indicated in the radionics settings of the radionics software, and charge then the water while the software is running on your PC.  The water will keep the radionics charge for good.

Most radionics machines and other devices for manifestation have one setting, rate, or “frequency”. This setting refers to a specific desired action, or trend.
The RAD 2400 series from HSCTI has one set of three dials for the trend and one set of three dials for the target of the operation. This is still in line with many other radionics devices on the market where you find one well for the person and another well for the “treatment”.

Orgone energy spiritual concept variously described as an esoteric energy or hypothetical universal life force. Originally proposed in the 1930s by Wilhelm Reich,[8][9][10] and developed by Reich’s student Charles Kelley after Reich’s death in 1957, orgone was conceived as the anti-entropic principle of the universe, a creative substratum in all of nature comparable to Mesmer’s animal magnetism (1779), to the Odic force (1845) of Carl Reichenbach and to Henri Bergson’s élan vital (1907).[11] Orgone was seen as a massless, omnipresent substance, similar to luminiferous aether, but more closely associated with living energy than with inert matter. It could allegedly coalesce to create organization on all scales, from the smallest microscopic units—called “bions” in orgone theory—to macroscopic structures like organisms, clouds, or even galaxies.[12]

Reich stated that deficits or constrictions in bodily orgone were at the root of many diseases, much as deficits or constrictions in the libido could produce neuroses in Freudian theory. Reich founded the Orgone Institute ca. 1942[13] to pursue research into orgone energy after he immigrated to the US in 1939, and used it to publish literature and distribute material relating to the topic for more than a decade. Reich designed special “orgone accumulators”—devices ostensibly collecting and storing orgone energy from the environment—for improvement of general health or even for weather control.[8] Ultimately, the U.S. Food and Drug Administration (FDA) obtained a federal injunction barring the interstate distribution of orgone-related materials, on the grounds that Reich and his associates were making false and misleading claims, and later jailed Reich and destroyed all orgone-related materials at the institute after Reich violated the injunction.[9] Reich rescinded the claim that accumulator could provide orgastic potency,[14] but this was not enough to stop the action.

The National Center for Complementary and Integrative Health lists orgone as a type of “putative energy”.[15] After Reich’s death research into the concept of orgone passed to some of his students such as Kelley and later to a new generation of scientists in Germany keen to discover an empirical basis for the orgone hypothesis, (the first positive results of which were provided in 1989 by Stefan Muschenich).[16] There is no empirical support for the concept of orgone in medicine or the physical sciences,[4] and research into the concept ceased with the end of the Institute.

Radionic instruments
Radionics (also called electromagnetic therapy (EMT)) is a form of alternative medicine that claims disease can be diagnosed and treated by applying electromagnetic radiation (EMR), such as radio waves, to the body from an electrically powered device.[1] It is similar to magnet therapy which also applies EMR to the body, but using a magnet that generates a static electromagnetic field.[1][2]

The concept behind radionics originated in the early 1900s with Albert Abrams (1864–1924), who became a millionaire by leasing radionic machines which he designed himself.[1] Radionics contradicts the principles of physics and biology and, as such, is widely considered pseudoscientific.[3] The United States Food and Drug Administration does not recognize any legitimate medical uses for radionic devices.[1][3][4]

The claims for radionic devices contradict the accepted principles of biology and physics. No scientifically verifiable mechanisms of function for these devices has been posited, and they are often described as “magical” in operation. No plausible biophysical basis for the “putative energy fields” has been proposed, and neither the fields themselves nor their purported therapeutic effects have been convincingly demonstrated.[13]

No radionic device has been found efficacious in the diagnosis or treatment of any disease, and the U.S. Food and Drug Administration does not recognize any legitimate medical uses of any such device.[1] According to David Helwig in The Gale Encyclopedia of Alternative Medicine, “most physicians dismiss radionics as quackery.”[3]

Internally, a radionic device is very simple, and may not even form a functional electrical circuit.[7] The wiring in the analysis device is simply used as a mystical conduit.[14] A radionic device does not use or need electric power, though a power cord may be provided, ostensibly to determine a “base rate” on which the device operates to attempt to heal a subject.[15] Typically, little attempt is made to define or describe what, if anything, is flowing along the wires and being measured. Energy in the physical sense, i.e., energy that can be sensed and measured, is viewed as subordinate to intent and “creative action”.[14]

Claims about contemporary EMT devices are similar to those made by the older generation of “radionics” devices, and are also not supported by evidence and are also pseudoscientific.[16][17][5] Even though some of the early works in bioelectromagnetics have been applied in clinical medicine, there is no relationship between alternative devices or methods which use externally applied electrical forces and the use of electromagnetic energy in mainstream medicine.[1]

The American Cancer Society says that “relying on electromagnetic treatment alone and avoiding conventional medical care may have serious health consequences.” In some cases the devices may be ineffective and harmful.[1] 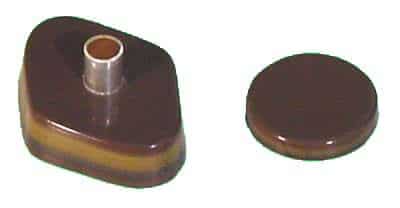